Polyphony is the compositional technique of interweaving two or more melodies. Imagine a soprano, alt, tenor and bass singing their parts of a choir piece. They each have their own rhythm and notes, so they are singing four different melodies at the same time. That is four-part polyphony. Much sixteenth century music for lute is polyphony for two or more voices, all played on one lute. That is complicated for in particular the left hand, as you will have to make sure all the notes are held for the correct duration, but also complicated for your concentration, as you will have to pay attention to all those melodies at the same time. It is as if you are the conductor of your own choir. 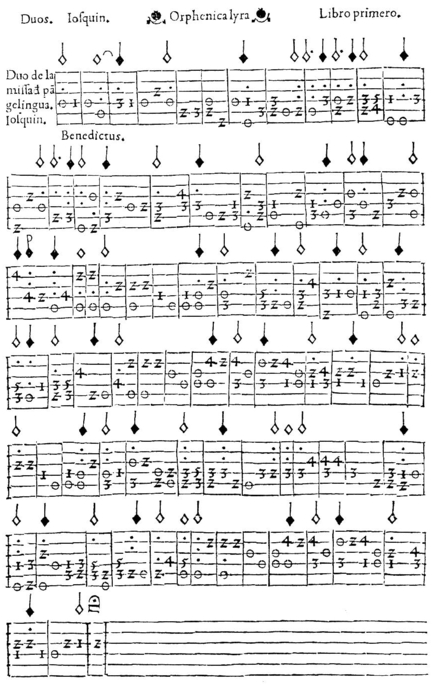 Duo de la Missa de Pangelingua. Josquin. from Orphenica Lyra (Seville, 1554) by Miguel de Fuenllana.The piece you will play in this lesson is taken from the book Orphenica Lyra by Miguel de Fuenllana. It was printed in 1554 in Seville in Spain. The music was written for vihuela, a Spanish instrument that looked like a guitar but was tuned like a lute. Many pieces written for vihuela were also printed in collections of lute music in the rest of Europe, so it is no problem to play this music on a lute. Fuenllana’s book starts with pieces in two-part polyphony, and these are indeed excellent to start with when you want to learn to play polyphony. I have chosen the second piece in Fuenllana’s collection: Benedictus from the Missa Pange Lingua by Josquin Desprez. Before you start playing, there are a few things you should know. Josquin’s mass is for four voices, but Fuenllana has cleverly chosen this movement as it is for two voices only, so it is much easier to play on a lute. Fuenllana used Italian tablature, but I have transcribed his music in French tablature for you, as you might be more familiar with that. Fuenllana’s intabulation, as vocal music transcribed to lute is called, has 76 measures, but Josquin’s Benedictus 95. Secondly, Josquin’s music is written in the mode or key of d-dorian. Fuenllana’s intabulation is in g-dorian, assuming a lute or vihuela tuned in g’. Thirdly, Fuenllana has added flats or sharp to many notes in Josquin’s music. This was the practice of musica ficta, where flats and sharps were not notated in the music, because all musicians performing this music would know anyway when to raise or flatten a note. There might have been personal preferences and regional variations as well. Lastly, we can find many extra notes in Fuenllana’s intabulation. Sometimes a note is struck again where the singer in Josquin’s version simply would have held the note. On a lute it makes sense to pluck the string again, as the notes would decay so quickly otherwise. At other places Fuenllana has added small embellishments. This too, can help to serve to sustain the sound of the lute, but those embellishments are also simply to make the music more beautiful on a lute.

Evidently Fuenllana has done more than simply transcribe Josquin’s music, so it is important to compare the tablature with the staff notation. You should know what notes belong to the upper voice and what notes to the lower voice, as this will tell you what fingers to hold on the strings. I have not listed all the differences between Josquin’s original and Fuenllana’s intabulation. For now it is enough to know that Fuenllana left out the first sixteen measures of Josquin’s original. Fuenllana also left out what has become measure 50 in my transcription. I think that is a pity, as without measure 50 you will miss the imitation between the two voices: first the second voice has the theme on the words in nomine starting on a g (the first time it appears is in measure 27), then the first voice follows with the same theme on the d above. That is why I have included measure 50 in my transcription.
Dotted slurs in the staff notation indicate notes that were held in Josquin’s original, but are struck again in Fuenllana’s intabulation. It is useful to know this, as you might want to pluck those notes a little softer, especially when they are the last notes in a phrase, as if they belong to a decrescendo vocal line.
Straight lines in the tablature indicate notes to hold, so you must keep your left fingers on the string here! This will make it necessary to think about some of the fingerings, to make sure you can leave your fingers as long on the string as is needed. That is why some fingerings are given under the tablature. This is not the only good fingering, it is just a fingering that works for me. You might come up with your own fingering that works just as well. As long as you keep your fingers on the strings for the full duration of the notes, all is fine.
Sometimes both voices have the same note at the same time. On a lute you will usually play only one note, like in measure 49 or 59. Occasionally it is possible to play the same note at two different places on a lute at the same time; this is done in measure 69.

Practice playing each of the voices separately, and practice singing them, to make sure you are familiar with the two individual melodies when you start playing them together. Maybe you have a friend who can play one of the voices on a recorder while you are playing the other voice on the lute. All this will help you to play polyphonic music. In polyphony we say you have to think horizontally, that is follow the individual melodies, and not vertically, that is to listen only to the chords. Polyphony on one lute is difficult for your fingers to learn, but maybe even more difficult for your ears as most of the music you are familiar with will not be polyphonic music, but music based on harmony, full of chords, from after 1600. The renaissance lute has a large repertoire of sixteenth century polyphonic music, and once you start to develop a taste for that, I am sure you will love it as much as I do.

This lesson has appeared as Renaissance Lute Lessons for Beginners No.4 in Nostalgia (No.26 October 2007), the news letter of the Lute & Early Guitar Society of Japan.